In a world based on technology, a small error in a program can lead to some interesting results. Take this for example: 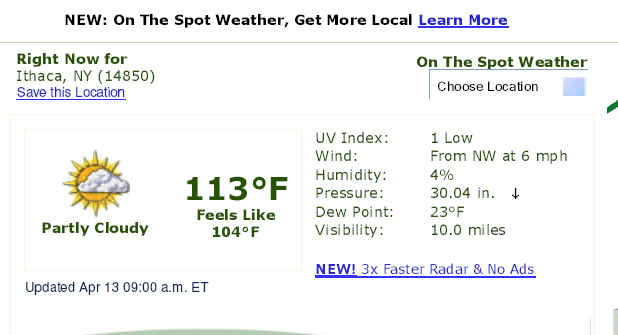 This was what weather.com displayed a few days ago when I typed in Ithaca’s area code. Rest assured that it was barely HALF the temperature they claimed it was. I think they probably had a variable slightly off and so it pointed to Arizona or something, but came up as Ithaca. Pretty humorous when it’s the weather that’s so off this way. Not quite so funny when it’s your phone freezing up.

Of course, there is much to be said about this situation. First of all, if Microsoft can’t even make their flagship product, the Windows Operating System, to work correctly, why are people letting them make software for cellular phones? This is why so many people are just switching over to using the Linux kernel for embedded devices. It is much more reliable. As my C++ programming book said:

There is almost nothing that you can do with your programs that will corrupt the operating system. However, this program would destroy your computer if you ran it on Microsoft Windows. Do not attempt to compile this on a Windows machine.

But besides the obvious fact that Windows shouldn’t be allowed near mission-critical systems, we have a more important fact to consider. When computers increasingly become more and more important to our lives we have to take extra steps to be sure that we program them correctly. Sure, anyone with some common sense would have known that it wouldn’t be 113 in Ithaca, but if we suspend common sense for a moment, what if someone had read that it would be 113 and then decided to go out in a tank top instead of a jacket?

What scares me the most is that more and more of my car’s functions are running on computers. Even if the programmers use Linux or some other stable OS, there are still plenty of potential programming problems that may lay in their own programs. They need to really be careful when they are making programs that people depend on. It’s not the same as a vanity C++ project created for yourself.